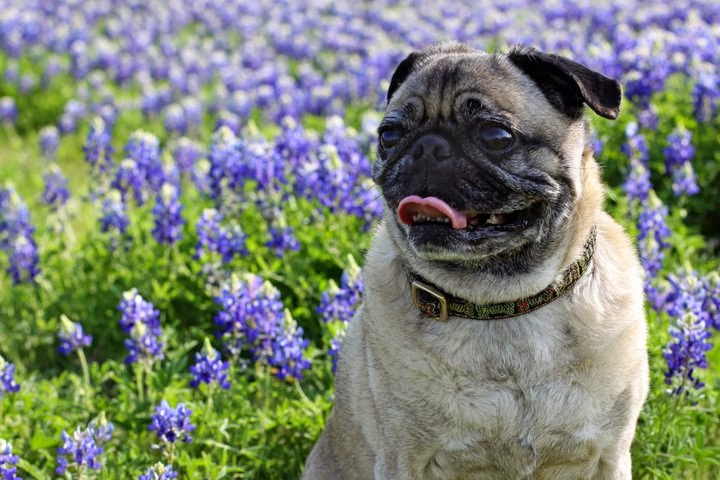 I've known for quite some time that this was how Mugsy's blog would end. That doesn't make this post any easier to write. Our dear Mugsy, the sweetest dog I ever had the privilege of knowing, has died.

Mugsy had been ill since last fall. We had countless visits to the vet for pancreatitis and stomach ailments. Some treatments seemed to help for a while, but he just never fully recovered. Ultimately, his once-voracious appetite was gone, and he fell from a healthy weight of 25 pounds to 17 or 18 pounds. Last Monday, we took him to a specialist for an all-day battery of tests. The veterinarian said she suspected that he had cancer, though only a biopsy could confirm it, and he was perhaps too weak for the procedure. Over the years, Mugsy had numerous operations to remove mast cell tumors from his skin, and the cancer probably spread throughout his gastrointestinal tract.

As I took Mugsy home, I thought about ways to make him feel better after a long day of being poked and prodded at the vet's office. I drove to a park, remembering how he'd once loved to sniff around and explore. But we never got out of the car. As I looked at Mugsy, I knew that he didn't have the energy. Instead, I just sat in the car stroking his soft fur, Mugsy comforting me more than I could comfort him. 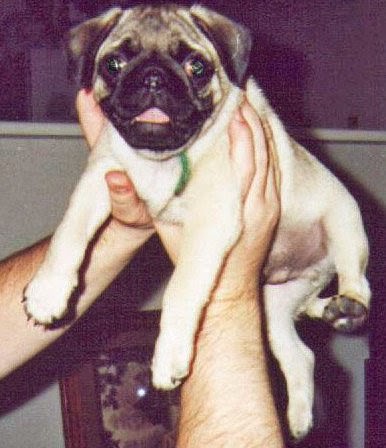 Mugsy came into our lives in mid-2001, when my current wife (then my fiancee) and I decided to take a drive to Wylie, Texas, to get an up-close look at this breed of dog we'd been reading about but had yet to encounter up close: a pug. A pug seemed like a good fit for our personalities and our small apartment; we'd just moved to Dallas after graduating from college. But we had no intention of taking a puppy home that day -- until we caught a glimpse of that snorting, fuzzy ball of energy. I can't remember the exact price we paid that day; I think it was $250. Whatever it was, it was one of the best investments we ever made.

After a day, the 6-pound pup had learned to sit on command. Within a week, he could shake hands. But such discipline was strictly on Mugsy's terms. I remember him grabbing ahold of my pant legs, hanging on and growling mischievously as I shuffled across the room. I remember him racing around the room in dizzying circles, occasionally making a play for the food on my plate or some underwear from the laundry bin before fleeing the scene. I remember him chewing up a $72 money order that I'd procured to pay a speeding ticket in Grayson County. Mugsy would misbehave, but usually in hilarious fashion. He was a born entertainer. 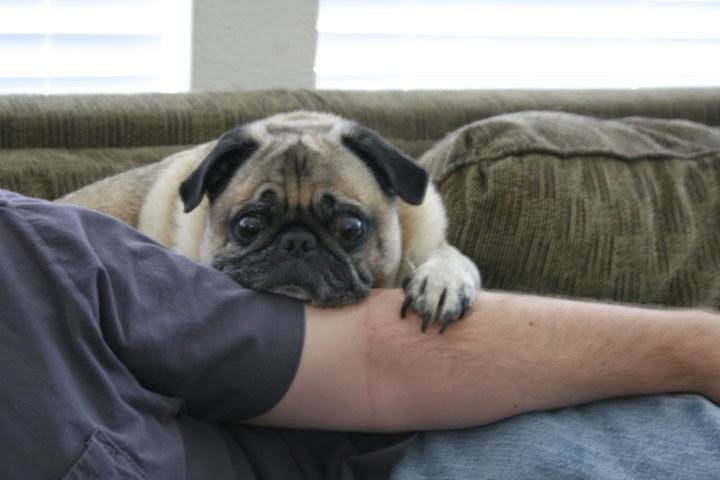 He was also the smartest dog I ever knew, and he had  a way of bending his human subjects to his will. If he wanted a stick of rawhide or to go outside or for you to sit down so that he could curl up by your feet to relax, chances are he'd find a way to make it happen. That playful yet imperious nature was, in part, what inspired this blog.

Many of the adventures on this blog were based on real events in Mugsy's life. He did, indeed, have an endless appetite for rawhide. He would brutally massacre most chew toys (the thick-skinned Mallard being a notable exception). In his younger days, he would have spent hours licking a belly button, if given the opportunity. And he loved to dress up for Pug-O-Ween and other occasions.

Over the last couple of years, Mugsy became completely deaf and nearly blind. But he retained his happy-go-lucky nature. Whether on a long road trip or at the unfamiliar house of a friend, Mugsy was at ease and in command. As long as he had somebody to snuggle up to, he was content. 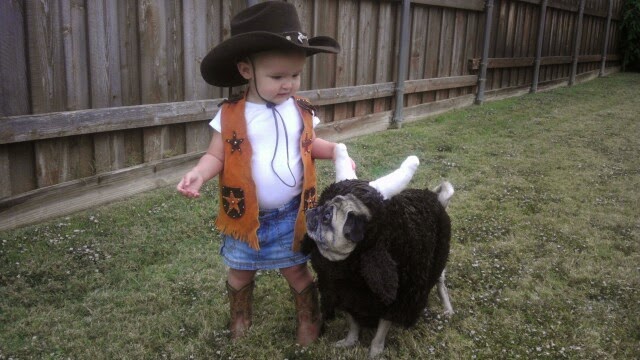 After our daughter, Cecelia, was born in 2012, I had trouble keeping up with this blog and with the ayatollah's social media accounts. I was caring for her and our two pugs during the day and working late into the evening, and so new posts slowed to a trickle before ultimately drying up. But Mugsy's adventures continued, albeit at a slower pace. He was a wonderful big brother and made quite an impression at last year's Pug-O-Ween as a bison alongside Celie's cowgirl and Wendell's old coot of the Old West.

As I alluded to in the opening sentence, we know what we're getting into when we let a dog into our hearts. With their lifespans being so much shorter than ours, we know it's a story that's likely to end in grief. And yet it's worth it, without question. Mugsy gave us 13 wonderful years and earned a lasting place in our hearts. Rest in peace, old friend. I miss you, and I love you. 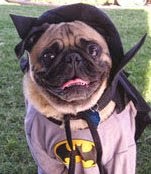 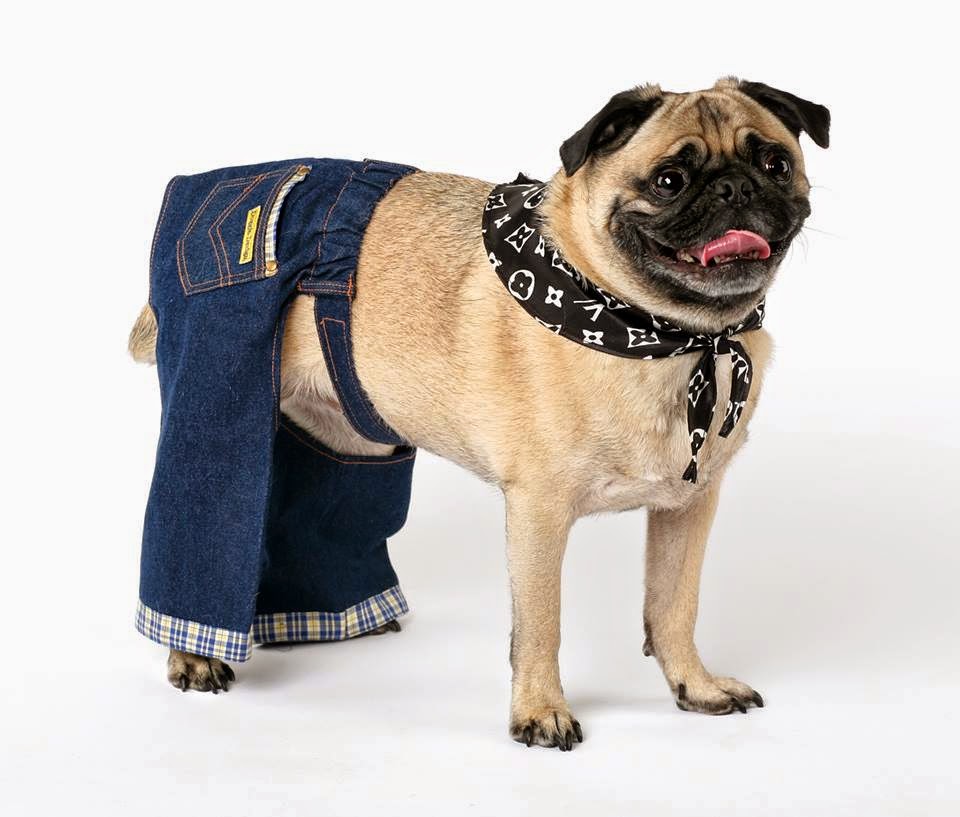 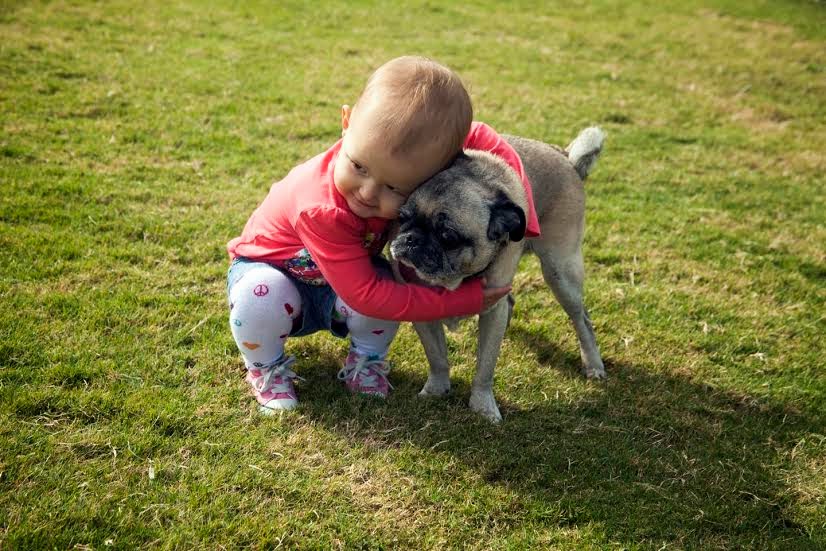 Posted by Ayatollah Mugsy at 11:50 PM

I loved reading your adventures of fighting against infidel chew toys, meeting with world leaders, frolicking with your harem, and issuing fatwas against offenders.

I'll never forget you and the fun and laughter you brought into my life.

Love you Mugsy, and the blog. We were sorry not to get updates after your sister was born, but that's very understandable. Peace to your family, and thank you for sharing the Ayatollah with us.

This is heartbreaking news. Please know that we loved and adored Mugsy and he was one of the first blogs we ever followed. We will always smile and remember him for the amazing life he had. Thank you and much love to all of you.

Pug love,
Salinger and Toby the Pugs and their human peeps (Laura, Kevin and Holden)

Mugsy, I miss you already. You, with a bit of keyboarding help from your dad, wrote an exceptional blog. May your afterlife be filled with Mallards, well-fitting turbans, and even more loyal subjects.

Rest in peace Ayatollah. I'm sad that you're gone, but glad you existed.


Hoping your father will consider putting all your blogs into a book. Please. The best tribute to a loving companion, I want a copy! XOXOX

To Mugsy's harem: you's was one of the first pug blogs I followed when I adopted Genevieve in 2005. I've followed along quietly luring all these years. When baby C came along, I wishfully imagined Mugsy stopping in time, never growing old. I will miss hearing about his wonderful adventures, but so glad I found you. May your lovely memories bring you smiles soon. I hear over the Bridge, there is unlimited rawhide.

I've loved reading Mugsy's blog, and have been a fan from day 1. We'll miss him!

He was a pug, take him for all in all,
We shall not look upon his like again.

SO SAD! Our Dixie just turned 15. not looking forward to her being gone :(

Oh, I am sitting here in tears. Funny how a little pug on the internet could bring me and so many other people joy. I have spent hours reading Mugsy's blog in absolute delight. Goodbye, Mugsy, and rest in peace.

As for you, Mugsy's human, I agree with the commenter who suggested compiling all of Mugsy's musings into a book. You are a great writer. Of course, you had a great muse. I am so sorry for your loss.

Mugsy will be missed.

I just want to say thank you for sharing mugsy with us. i've enjoyed throughly reading thru the blogs and it certainly made my day brighter. I can't imagine what it was like but i hope you find comfort one day that your beloved pug is probably having the best time of his life …

To my dear anonymous friend.

It has been too long since I visited the 'Tollah's blog. I'm especially sad to finally read this post. I was Brody the Bulldog's keeper (brodysbunker.blogspot) - and I have fond memories of those early blogspot days, with Ayatollah and his dogloo Mosque. But I'm glad for the fun we had together. FWIW, Brody has also passed away (https://www.facebook.com/brody.dbulldog) and so, even now, months/years later I can relate and am deeply sorry for your loss. To this day, I am thankful for Mugsy's zeal and enthusiasm - and for your caretaking. May peace be with you.

I'm so sorry for your loss. I've been reading this blog for a number of years and have enjoyed every visit.

Thanks for the laughs and fun, Mugsy.

Mugsy's blog was one of the earliest blogs I read back in the day when people were not yet into FB as a way of life. Its been years since i last read his posta but today, for some strange reason, I remembered him. I had to google "pug" and "ayatollah" because I lost the link to his blog site and I can hardly remember its name. Im so sad to learn that he has passed away. :(

We found your bloggie while wandering today, wanted to stop and paw respect,

So luck to come across your excellent blog. Your blog brings me a great deal of fun.

You have a good Blog and great content on your blog.Thank you for taking the time to post this.

Now you have got your dog a suitable kennel or a dog run, what is your dog doing when it is not exercising? I browsed through quite a bit dog beds with all sorts of design and style.

I don't know why, but I was thinking about your little Mugsy today and remembering how much fun it was to follow his antics. Mugsy lives on!

It is very good and nice collection. Love to see this. I am looking for more, can you providee me the more collection? Thanks.
Farm Supplies

Ayatollah Mugsy
I am Mugsy, supreme ayatollah of Pug Life Ministries. I bark the word of Allah.

Together, we can build the Dogloo mosque